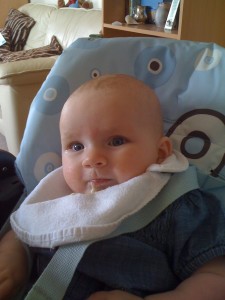 Emily began solids this week. Actually, her first taste of solids was nearly 2 weeks ago, but we put it on hold because there was a load of upheaval at home. Yes, she is young – she only turned 4 months old on Monday. And as the health visitor pointed out, “We do prefer them to wait until 6 months to start solids”. Oh, really? Not sure Emmy would agree with you. Without going into long and boring details, she is letting me know in no uncertain terms that her current level of intake is not quite doing it for her. I think if I suggested to Emily that she wait another 2 months before moving her on, she might take my arm off at the elbow. Daniel was the same.

In fact, pretty much every time we moved Daniel on, from weaning to sleeping in his own room to giving up a dummy to toilet training, he let us know that he was ready for it. When he was ready to move out of our room, his sleep worsened, improving once he was in his own space. Same again when it came to changing from a cot to a bed.

Take toilet training – I’m more than half convinced that it’s actually the child training us. We just established that Daniel was very good at using the potty and asking for it and fetching it. We were in a nice little comfort zone, and I thought I would introduce the concept of the toilet in a couple of weeks, no hurry. Daniel decided differently, and completely off his own back he started using the toilet instead of the potty.

Emily is so far following firmly in her brother’s footsteps, letting me know when it’s time to move on. I suspect most babies are the same. This is a pretty handy thing when you think about it. Most parents are completely clueless (including us by the way!), hence the market for parenting help books, the sheer abundance of forums on the net, the helpful blogs. We joke about needing an instruction manual when we bring our newborn home but inside we’re shouting “Please give us an instruction manual!” Sweating madly, convinced we’re going to end up causing untold damage to this tiny little being because WE DON’T KNOW WHAT WE’RE DOING. And we cling onto the moment that we were in 5 minutes ago because the thought of the future, of them growing up and not needing us any more, is too scary. But luckily, for them anyway, babies are smarter than us. They know what they need, and when, and they find ways of telling us. I’m not ready for Emmy to start weaning. I felt like telling the health visitor that. “Do you think I WANT to start solids? Do I want to spend hours cooking and pureeing veg and freezing it in little blocks and persuading her that peas are actually delicious? Do I want to start the process of moving my daughter away from the intense closeness that breastfeeding brings, knowing that I won’t get that again?”

But Emily, my four month old baby girl, is smarter than me, and smarter than the expert. She knows she is big and strong, and needing more. So I’ll listen to her, and not the experts, thank you so much for the advice.