I have a new cyber love.

Having lately discovered Pinterest, and raved about it on twitter (as much as you can rave in 140 characters) I thought I should devote an ENTIRE blog post to the subject. I’d also refer you to this post by Jane Alexander.

First off, I DON’T think it’s yet another social networking thing. Well, it is of course, but I’m not using it for that really. You can use it for social networking if you’re really crafty and arty and have lots of pretty work to show off and sell; it’s a great showcase for that.

I like it for two reasons though. First, it’s BRILLIANT if you need to procrastinate and you’ve been pressing refresh on twitter for the last ten minutes. Get stuck into Pinterest and you could easily fritter away an hour or so without even breaking a sweat. Take your pick of cute kittens in funny poses, inspirational posters prettified up, a FABULOUS collection of forgotten houses which are very atmospheric, dream up a house of fantastic staircases and massive rooms (a stair case that has you going up stairs but down a slide! WANT!) and drool over the most amazing libraries and bookshops in the world. Fashion, craft, DIY projects, hairstyles, etc etc etc. Seriously easy to lose time without even noticing.

The other reason I love it, a slightly less frivolous reason, is for inspiration. As a writer, you can find photos of people to match your characters or settings which can both motivate you to keep going and spark something new off. I know lots of people like to have that visual cue and I do at times, though it’s not my particular ‘thing’. And those abandoned houses I mentioned earlier? Fabulous story prompts! It’s not just writers who can find inspiration, either. Designers, crafters, artists –  there are a million ways to use Pinterest to get project ideas, share tips, make mood boards or pin colour combinations for future reference. You organise your pictures into boards – imagine you have a series of corkboards that you’re sticking these pictures too, each with your own focus. As far as I know you can have as many boards as you like which means you can organise your pictures whichever way suits you. I have 21 boards at the minute but I’m sure I’ll add to this continually. I also have my twitter and Facebook accounts linked in so I can, every now and then, post a particularly good picture to my usual networks too.

In case you’re a particularly conscientious person, the owners of the images do not lose out, as the ‘pin’ is only a link to the original work. It’s not removing the original image or copying it but bookmarking it. Which, by the way, means you can very often find new blogs to read or artists to follow. And there the link back into social networking; even if you’re not using it to extend your network it’s still very social and another way of linking up with people who like the same things you do. This is, in my opinion, why it’s not a tool like google+. I tried Google+ and yeah, it was cool, it was a mix of twitter and Facebook and I could see why people liked it. But I stopped using it, because at the end of the day it didn’t really do anything that twitter and Facebook weren’t already doing. Pinterest is different because I’m not using it to network, I’m not trying to gain followers or get more people to listen to me, and it is adding a new, visual dimension to my online activity that wasn’t there before. Whether I need to use Pinterest or not is a different matter, but I like it and as long as I continue to like it I’ll keep using it.

Here’s me on Pinterest, if you fancy seeing what sort of things I like and the boards that I’ve made. If you don’t have a Pinterest account or invitation then leave a comment and I’ll send an invite to your email address. Because I’m THAT nice… 😉 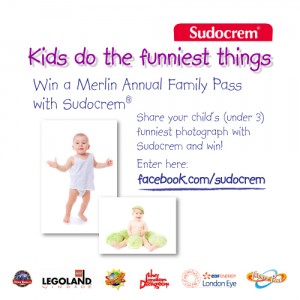 I’ve been sent the details of this competition, which I think looks loads of fun! I love Sudocrem, it’s a constant feature in our house especially as Emily is prone to outbreaks of sore skin and it really seems to soothe it. Apparently they’ve been going 80 years. Blimey.

Have a read and then go and enter (that’s an order!).

Win yourself a £400 family activities voucher

To celebrate the launch of Sudocrem’s shiny new website www.sudocrem.co.uk and informative social media channels, we’re offering a 12 month Merlin Family Pass worth almost £400 to the winning mum or dad who shares with us their child’s (under 3) funniest photograph with the story behind it. Please note submissions must not relate in any way to the use of Sudocrem Antiseptic Healing Cream.

It’s simple – just visit www.facebook.com/sudocrem, ‘like’ the page and share your child’s funniest photograph with the story behind it.

Content should relate to children aged 3 and under only. Please note, submissions must not relate or refer in any way to the use of Sudocrem Antiseptic Healing Cream or any other licensed medicine. Photographs and supporting text are both acceptable. The acceptance, disqualification or deletion of competition entries, without explanation or prior notification is entirely at the discretion of Forest Labs, as set out in the Terms and Conditions found on www.facebook.com/sudocrem Entries can be submitted up until midnight on Wednesday 16th March 2011.

Our winner will be selected by Forest Labs staff and our wonderful celebrity midwife Nikki Kahn. The winner will be announced via www.facebook.com/sudocrem on Monday 21st March 2011. Shortly thereafter the winner will be sent a 12 month Merlin Family Pass worth almost £400 (Family of 4 = 2 adults + 2 children OR 1 adult + 3 children) children must be under the age of 12 and full Merlin Terms and Conditions apply. The pass allows entry (with some restrictions) into top UK attractions including Alton Towers Resort Theme Park, THORPE PARK, Chessington World of Adventures, LEGOLAND® Windsor, The EDF Energy London Eye, The Dungeons, Warwick Castle, SEA LIFE Centres & Sanctuaries, Madame Tussauds London, Madame Tussauds Blackpool (from April), the Blackpool Tower Dungeon (from Sept) and the Blackpool Tower attractions (from Sept).Terms and Conditions relating to the use of the Merlin family pass are dictated by Merlin Entertainments Group only and can be found here: http://www.merlinannualpass.co.uk/what_you_get/terms_conditions.asp

If you didn’t already know, Sudocrem’s – Sudocrem Antiseptic Healing Cream is one of the leading baby nappy rash treatments and has recently undertaken a full adoption of social media including Twitter www.twitter.com/sudocrem, Facebook www.facebook.com/sudocrem and a blog www.sudocrem.co.uk/blog, run exclusively by some very experienced mummy bloggers. All the social media channels will be communities breaking new ground and getting to the heart of all matters that are important to parents today.