I love the idea of chapbooks. Those small, cheap pamphlet-type books that are produced purely because the writer just wanted to get their work out there. Because they felt they had something important to say, or they wanted to express themselves through poetry or prose, or to record some part of their family’s history or values. Those writers very bravely put their work out for people to read without thinking (much!) of the bigger picture, of getting an agent or a publisher or what happens if people don’t like it.

There’s a whole lot of discussion at the minute around e-publishing and self-publishing and should you hold out for a deal or do you do it for the money or the recognition, or do you just want to say something. I think, personally, and I doubt I’m very original here, that this is the age of the ebook, and it’s the perfect medium for a chapbook. People have short time spans available in the pressures of the modern world – even people who don’t ‘work’ like me but care full time for children or other loved ones. At the same time the explosion of the kindle, smartphone and ever-cheaper ereaders means that there’s huge potential for buying cheap publications and carrying them round easily for those moments when you do have some precious leisure time to read. I know, for example, that there’s a massive market for iPhone reading apps, whether it’s the classics, the kindle app or iBooks; I’ve had my own little bit of success with Ether Books who produce specifically for the iPhone (branching into other smartphone operating systems later in the year – hint hint) and who published my short story a couple of weeks ago. Without knowing the specific numbers involved, I know it’s been popular because my story has been in the Bestseller list since it was published (ok, bragging over now).

That small success has given me a much-needed boost. Family upheaval lately has meant that my writing has very much taken a back seat and I’ve lost direction. The email from Ether gave me a proper kick up the behind and I’ve taken up my pen again. Well, pencil, actually, since I’ve rediscovered a love for working through ideas with pencil and notebook. That, combined with that admiration for chapbook writers I mentioned above, has led me to a little project of my own. 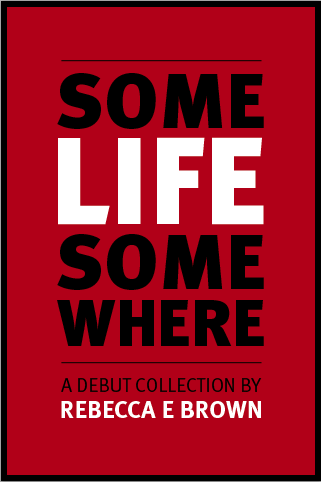 I proudly present my own e-chapbook, Some Life Somewhere. It’s a collection of seven short stories told through dialogue, and touching on the big questions – life, death and the tricky bits inbetween. I’ll be publishing it on kindle and through smashwords later this week, and I’ll put a link to the Amazon listing on here and my website and facebook page. My very talented husband has done my cover and I love it. I’m really excited about the whole thing  -even if only my mum reads it, it’s me taking a big brave step and it’s what I need to do to pick my feet up and run along my own path as a writer.