A lot of different things over the last year or so have changed the way I react to the world. Last year I became more interested in cooking, for example. It was still just one of those things you have to do; I wasn’t particularly enjoying it (although more so than before) and I certainly wouldn’t have said it was one of my interests. It didn’t help that I had a tiny cooker with a bottom-burning oven (the flame was on the bottom of the oven. It didn’t burn my bottom. I mean…oh, never mind.) and fairly basic equipment that hadn’t been updated much since I was a student a million years ago.

I also had the struggle with my faith and an increasing sense of social responsibility, which led me to Quakerism, which fostered my growing sense of social responsibility. And so on, in ever-spiralling ethical, fair trade, recyclable circles. I’ve also developed a fondness for bees, and quite like the idea of having a hive; ‘idea’ is as far as it’ll ever get as Beloved Husband is not that keen on the very expensive and laborious idea, so I’ll have to make do with a bee hotel. Yes, it’s a real thing.

We moved house, which gave me both a brand-new, squeaky-clean cooker (with a proper oven! Of a decent size! With a second oven on top!!) and a garden, with enough room to begin thinking about growing my own herbs and vegetables for the first time in my life. I also saw a doctor about my depression which gave me a sort of permission to start thinking of ways to help myself – including baking. Now that I have a proper oven, I threw myself into baking and found a) that baking and cooking are really, really therapeutic and b) that I can do it. I can make things that make people’s eyes glaze over and cause them to do that little hum of satisfaction. And baking led me to savoury, ‘proper’ cooking, and thinking about our diet as a whole, which has radically changed over the past couple of years, especially the last 5-6 months.

I will admit here that I am pretty badly overweight, but since I enjoy food it’s been a horrible struggle to motivate myself enough to diet. Paul McKenna’s book I Can Make You Thin has been a huge help, with its emphasis on a few simple guidelines, more to do with the way you eat than what you actually eat, and I’ve gained a huge amount of control over what was previously mindless comfort eating. I really notice the flavour of food more now, and get more enjoyment from smaller but tastier portions. I listen to when my body tells me I’m hungry and try to stop when I’m full. 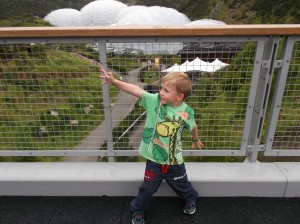 Then, bearing in mind that I’m already picturing cabbages growing in my wee garden  à la The Good Life, we found ourselves in Cornwall on holiday, very near the Eden Project at St Austell.

Wow. I think, in a slowburning kind of way, it might have changed my life. I can’t recommend a visit enough. The range of plants they have growing there is incredible and they hammer home (HARD!) the fact that there is more to food than how it ends up on your plate or in the supermarket. Seeing rice growing, or coffee beans, or cocoa beans, or chilli peppers, makes you think a little bit more about what you’re eating, and appreciate it a little bit more too.

So we came home, and little bits of things are ticking away in my head. Discovering I can cook, along with Andrew’s preference for savoury things, and beginning to read cookery magazines with real pleasure, has led me recently to plan much more healthy and varied meals. We’re even trying vegetarian meals once a week; this is a major thing for us!

Thinking about the source of food, a disappointment over Morrisons’ decision to reintroduce eggs from caged hens into their stores make me look into food sourcing. I’ve bought free range eggs, fair trade coffee, tea, bananas and sugar for years; I’m going back to my brief pledge of a couple of years ago to eat (wherever possible) fairtrade chocolate; and we’ve started buying organic milk.

Then I read a sample (thank you, Kindle) of the wonderful Michael Pollan’s In Defence of Food, as well as his The Omnivore’s Dilemma  and I’ve just finished Food Rules; yep, also his. These bits of writing have helped me bring together all the different influences on me over the past year or so and how I make changes for the better in our lives.

Basically, his rule is: Eat food. Not too much. Mostly plants. Genius!!

The key thing here is to realise that he’s talking about FOOD, not food-like, processed, substances. Richard Bertinet, the chef, has a similar attack on bread, calling shop-bought mass produced bread not bread but a bread-like substitute (yes, bread-making is on the agenda for the near future too). Michael Pollan extends this to all packaged and processed food, and it’s not until recently that I realised just how much of this I bought. He recommends buying fresh, whole foods and cooking yourself wherever possible. He tries to get us to evaluate the nature of our relationship with food, and by extension, with where food comes from ie Nature. It all comes back to our connection to our world and how we impact on it. And how awareness of Nature impacts on us.

Now, I’m not naive (ok, not THAT naive). I know that, particularly now, good whole food can be expensive, and we’re still in the position of having to watch where our money goes. We may well have to go back to eating cheap processed food. But I’m also discovering that with some planning, cooking proper food is actually, counter-intuitively, NOT working out as much more expensive. Seriously. Obviously, some things make a substantial difference such as organic veg, meat, etc. But on the whole, our food bills are little different to what they were 8 to 10 months ago and our diet is changed beyond recognition. I’m throwing out my rules on fats, nutrients and sugars; we’re having some treats, some meats and plenty of veg. I’m also looking at Mediterranean influences and flavours as that’s what suits us as a family.

I seriously recommend that people have a read of Michael Pollan’s work. I’m in no position to judge anyone’s cooking or lack of it or their approaches to food, but I know that I had very, very bad habits which are now changing.