In honour of my grandma-in-law, who turned 80 yesterday. 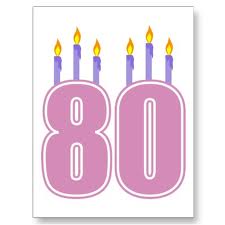 “Champagne and fireworks,” said Dot, not looking away from Deal or No Deal. “It’s not everyday you turn 80. I want champagne and fireworks.” Her son rolled his eyes and made a note on his phone.
“Mam,” he said, “You know champagne costs a load, don’t you? And fireworks will too, this time of year. And I don’t know how we’ll get them sorted for tomorrow night.”
“Don’t worry about that, Paul,” said Dot. “Got a bit saved up. Bingo. No deal! No deal!”

Her daughter looked up in surprise, then realised she was talking to Noel Edmonds. “She gets battier every year,” muttered Carole, ironing a lace tablecloth.
“So the club’s ours from lunchtime, to sort out the food and that,” Paul said, ignoring his sister. “And I’ll get some champagne from Asda.”
“Susan at work knows someone who does fireworks and stuff,” said Carole in a resigned tone. “Or Bill from the estate, he might know where we could get some.”
“Off the back of a lorry, likely,” said Paul.
“Eh?” said Dot, as the adverts came on, a smooth velvet voice extolling the virtues of a Caribbean cruise.
“Nothing, Mam,” said Paul, getting up and giving her a kiss on the cheek before pulling his coat on.
“Get them fireworks sorted,” she told him. “The bairns’ll like them. I want them at my party, even if I’m not there to see it.”
“What’re you talking like that for?” scolded Carole. “Course you’ll be here, Mam. Strong as an ox, you are.”
“She been like this much?” whispered Paul as the adverts finished and their mother’s attention was diverted.
“Yeah,” said Carole. “She keeps getting these morbid turns. Says she won’t be here for her party.”
“Think there’s something she’s not telling us?”
“Nah. She’s just getting old. Old people get thoughts like that in their heads, don’t they?” Then, speaking up, “We’re off now Mam. I’ll let you know about the fireworks.”

“Ok, pet,” said Dot, giving kisses to each of them without taking her eyes off the screen. When she heard the click of the front door she sat back in her chair with a sigh. She got up and went around the living room, running her fingers over the photos arranged on various surfaces, each one sat proudly on a lace mat. Faces stared back at her, children, grandchildren, great-grandchildren. Norman. She missed him so much still; even after all this time, it would still feel strange having a birthday without him. Her eye fell on a pile of envelopes, her name scrawled twenty times, waiting to be opened. She was supposed to be saving them for her party, but since her birthday had actually been yesterday she decided to open them all now. She read each one out loud, squinting at the handwriting, putting each one aside reverently then standing them up in the spaces between her pictures. She would have to chase up her grandson, she still didn’t have one of him and his wife together. She smiled at the ones from the great-grandchildren, her bairns. A couple of them were starting to write their own names, a couple were doing bold crayon scribbles in blue and pink and lime green. One card had a wrinkled patch from a damp kiss and a note ‘Emily kissed this card for her great-grandma’. She picked up the discarded envelopes and put them tidily to one side, ready for the recycling bin.

The following evening, she was all ready. Glammed up, full make-up, the works. The lights were on a timer, the blinds were tilted, everything ready for her to leave for the party. Carole had called earlier to make sure she was ready. “Taxi’ll be there at seven, Mam,” she’d said. “Make sure you’re ready.” Dot looked at the clock, and as seven o clock struck a horn blared outside. She picked up her bag, gave one last look around and carefully locked the door behind her. The taxi driver gave the suitcase a curious glance, but obviously just thought her age was getting the better of her.

“All set then, love?” he said cheerfully, heaving the case into the boot. “Bit much for a party, isn’t it? Planning a good night?”

“Change of plan,” Dot said. “Just call at the club with this,” she handed him an envelope, “then Newcastle Airport, please.” He raised his eyebrows, but didn’t say anything. Dot could almost see him mentally rubbing his hands together at the unexpectedly large fare. She opened her handbag, and checked. Tickets, passport, cruise itinerary,  and around £10000 in various currencies. Well, it was pointless letting all the bingo winnings sit there doing nothing. In a few hours she would be enjoying champagne and fireworks just like she wanted, from the lounge on the Freedom of the Seas.

4 thoughts on “Champagne and Fireworks”