I’ve meant, for a couple of weeks, to have a go at the #FridayFlash meme on Twitter. I don’t know if you sign up to anywhere – if anyone knows, can you let me know in the comments please? Much appreciated. Anyway, the following conversation took place yesterday on Twitter between me and @alisonwells (whose excellent blog is here). NB read bottom tweet first: 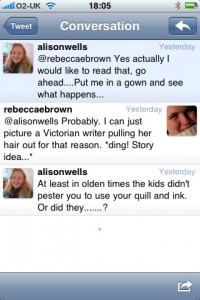 So, gauntlet thrown down, I went away and did just that and here’s my Friday Flash Fiction. It’s very unpolished, so be forgiving please!

The peace was unprecedented. The hot weather meant that the children were out in the yard with a ball. The chores were done. The fire crackled in the grate with the kettle just beginning to bubble, and Alison pushed the window open a little further before checking everything was set up on her desk.

The tealeaves were carefully measured out. The tea cup was perfectly lined up with the milk jug to one side, while in the centre of the desk a sheaf of pristine paper stared at her, beckoning her. The quill and ink pot were positioned carefully to the other side. Neat, organised, just the way she liked it but so rarely managed to achieve. She poured hot water into the teapot and sat down with a sigh, wondering for the umpteenth time what it would be like in a world where women did not wear corsets or petticoats or have fires roaring in the heat of summer just so they could have a cup of tea or hot water. Shaking her head out of her fantasy, she picked up her pen, carefully shook off the excess ink and carefully wrote, ‘Chapter One’.

“Mama!” Alison sighed and pushed back her chair, going to the window and asking what the problem was. “Jamie kicked the ball out of the yard. He did it on purpose, Mama, he did!” She went out, restored peace and recovered the ball, just before the coalcarrier’s cart went over it. Returning to her desk, she sipped her tea and recaptured the story that was still hovering at the front of her mind.

“Mama!” Alison sighed and pushed back her chair, going to the window and asking what the problem was. “Jack pushed me. He did it on purpose, Mama, he did!” She went out and presided over the peace process, gave the stew a stir on her way back through the kitchen (fearing her sister Jane’s wrath should she let it burn before she returned) and took another sip of tea. The story still danced within her reach, and she picked up her quill again.

“Mama!” Alison sighed and pushed back her chair, going to the window and asking what the problem was. “Jenny stole my marbles from me. She did it on purpose, Mama, she did!” She went out, discussed the stolen marbles and checked the washing on the line. Another sip of lukewarm tea helped her grasp an elusive thread of the story that was slipping away from her, and she picked up her quill again. This time she managed to write another word, ‘Once…’

“Mama!” Alison sighed and pushed back her chair, going to the window and asking what the problem was. “Joe called me a nasty name. He did it on purpose, Mama, he did!” She went out, delivered a short but pithy lecture on appropriate language, and returned to the desk, stirring the coals on her way past before they died to glowing embers. She stared into her cold cup of tea, wondering if there had ever been a story or if she had only imagined it.

“Mama!” Alison sighed and pushed back her chair, looking up to see a line of small faces in front of her desk. “Can we have some paper and your pen? We want to be writers, just like you.” Alison looked at the paper, the pen, then the hopeful gazes fixed on her. She pushed her chair away and, leaving them busy pouring their words onto the paper, she put the kettle on to boil again.