So, it’s halfway through National Novel Writing Month. Hey, here’s a completely trivial question, should Novel Writing be hyphenated? Since the novel itself isn’t actually doing any writing but is the object being talked about? Or am I misguided? Any grammar freaks who can put that niggle to rest, answers much appreciated.

Where was I? Oh yes. Halfway through NaNoWriMo (it’s quicker and it saves me from worrying about the hyphen thingy) and I’m not quite on track. I’m not horrendously behind…well, yes, actually I am, who’m I kidding? To be on target to complete the 50000 words doing 1667 words a day I should have written 25000-ish by now, and I’ve actually written just under 18000. To finish on time, according to my stats page, I need to write 2146 words a day. This is actually more than do-able, assuming I can focus and sit down every day, which is easier said than done.

So what does that mean for me? First of all, I’m not throwing in the towel. There are a few reasons for this: first, I want the GLORY, the satisfaction of saying that I did it. Does that make me a bad person? Probably. Tough. I also want the writing software Scrivener, which is being offered at a 50% discount to all NaNo winners. I’ve had this on demo and absolutely love it, so I’ll be getting it anyway, but I would rather get it half price! And third, the t-shirts the winners can buy are just so darn pretty. I want one. This definitely makes me a bad person. Of all the motivations I’ve heard for finishing a novel, “I want a t-shirt” has not been among them. The thing is, if I say, aloud, “I’m not going to make it, I’m giving up on NaNoNow but I’ll still write the novel” I probably won’t. I’ll probably go back to my pre-NaNo work in progress and both of them will creep along at the pace that I have the luxury of at the minute being an unpublished, uncontracted writer. If I say I still have a chance and I’m still in there, I’m more likely to push myself and get this written, even if I end up not ‘winning’.

Have I learned anything so far? Well, yes, actually. First of all, it’s good deal more difficult to turn off my inner editor than I thought. I’m constantly checking my research, rewriting my last sentence (because I CANNOT let typos go. I just can’t. Don’t make me.), thinking about what I’m writing. Not so much in plot terms but more like “Is this sentence even English?” This gives me confidence in a strange kind of way, more for the future than for this particular project, but also that this project has some potential in it. I may be deluded in thinking this, it may a leap of logic, but please don’t tell me until December 1st.

Second, it’s sort of a taster of what life as a Real Writer is like. Before you eat me, I mean a writer with a deadline, a contract, having to make time wherever possible, having to squeeze writing time in around family, having something other than the ‘muse’ making me write, and having to sit down and write nearly every day. It puts a little bit of extra pressure on myself to lift my writing from ‘something I do when I have time’ to ‘something I make time to do’, which was beginning to happen but NaNo has made me prioritise it more. And I like it. This also gives me confidence that I’m doing that which I was Born To Do. Not in that my writing is some great gift to the world, just that there’s nothing I can do better or enjoy more on a long-term sustained basis, and that gives me this kind of satisfaction. The satisfaction I get from my family and faith is entirely different; with writing, it’s just about me.

Finally, that writing is a) much harder than it looks (I know, I know, those of you who’ve ‘got’ that are going “well, dur”) and b) a thousand times more satisfying. I started this blog post feeling pretty down in the dumps because of a) but I’ve finished it feeling energised and motivated because of b).

So, madness is definitely taking its toll. But I’m loving it.

So, NaNoWriMo is just about here. If you don’t know what that is, I’m not going to explain again. You can see my blog post about it here or visit the official site here.

I’ve finally decided on the plot, after three or four have been duly considered – I should be fine as long no alien abductions or teenage vampires creep in. They would not fit very well into 1909 North East England. I’ve got together a little kit, including a brand spanking new pencil case. For more ideas on a tool kit, have a read of Catherine Ryan Howard’s post here. I’ve read advice blogs, the best by far of which is here, and gathered my favourite writing advice books together.

What I’ve noticed as other writerly friends limber up for a month of madness, mania and mental agility is our tendency to accumulate Things to help or inspire us. I don’t mean the copy of Stephen King’s On Writing growing steadily more dog-eared or music ranging from soothing classical to raging metallic, although these things are important. I mean actual THINGS. If you follow @mruku on Twitter you will have noticed many references to his writing hat, and the considerable anguish involved. Catherine’s post, above, mentions a clicky pen – not to write with but to click incessantly to keep her fingers busy as well as her mind. I am only glad I’m not working in the same room, or I would have to throw her out of the window – sorry Catherine! (or force her to make me coffee constantly…) 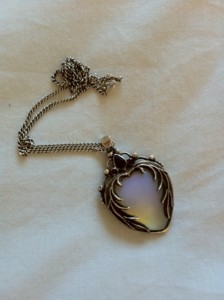 I have a necklace. That’s it, in the picture. I tend to wear it when I want to feel inspired – not because I think it brings me luck or anything, but because one day I’m fairly sure I’m going to write a story featuring the necklace. It just looks like it should have a story. Like it has magical properties or something. Again, it’s not that I DO think it has magical properties, just that it looks like it should. I look at it, I start imagining a story, and the bit of my brain that fools me into thinking I can tell a story kicks in.

I always think writers should have a little quirk. Like a ritual or an possession or some little oddity like a writing hat. Something we can tell the interviewer from The Times when we are on the bestseller’s list for the fourth Christmas running. Something where we can tell our grandkids, “And Grandma always had to have her special necklace/pen/hat/coffee stirred three times anti-clockwise, four times clockwise then blessed with holy water, before she wrote a masterpiece.” And if I’m not on the bestseller’s list four Christmases in a row? I can blame the necklace. Obviously, it just wasn’t magical enough.

Anyone else got any oddities they’d like to own up to?

I am humming and ha-ing over the idea of signing up for NaNoWriMo this year.

Writers reading this are probably thinking “Yey, I’m not the only lunatic!”

Non-writers reading this are thinking “Is that even a word?”

NaNoWriMo is short for National Novel Writing Month – although really it should be International Novel Writing Month, as people from all over the world sign up for the mayhem. Er, I mean, challenge. And it does just what it says on the tin. You write a novel in a month. If you don’t believe me, look here. The basic idea is to achieve 50000 words between 1 and 30 November, for which you get a lovely badge for your blog, and an excuse to open a bottle of champagne before collapsing in a crumpled heap. You will be excused for saying something along the lines of “Why? Why would you do that to yourself? Why, Becca, WHY?” I know that refrain keeps screaming in my own head.

I heard about this last year, and was tempted to join in, but a) I was into November when I heard about it and b) I still had very little confidence in my writing. This year I have been given a huge boost by all you lovely people that I can actually string two words together, I have formed very real and strong friendships with other writers who are joining too and, unbelievably, I have a plan.

Now, 50000 words is a heck of a lot of words to write in 30 days. I think the daily word count is something like 1660 words to reach the target – achievable, but, um, challenging. But in actual fact it is a short novel, more of a novella. Or a children’s novel. Which is lucky, because that’s what I’ve got planned. So after November, there shouldn’t be too much to add to it, before I go through and rewrite that draft into something that makes sense. If you clicked on the link above, you’ll have seen that the finished 50000 words doesn’t have to be refined or edited, it is pure word count that counts and it’s up to you to do something with it afterwards. And I have been privileged to chat with people who have turned it into an actual novel, worthy of submitting to publishers. So my plan is to take the ideas I’ve had for my children’s book, use NaNoWriMo to get most of the first draft written with the peer support and encouragement that comes with working to the same goal together, and see what I can do with it afterwards.

It is going to be hard work – after all, I have two small children at home and at the minute sleep deprivation is taking its toll too. It’s also coming up to Christmas so that will have to be factored in. BUT the good news is that Daniel goes to nursery from September, so I have 2 and a half hours every morning to use. I have some evening times. I’m not even going to try and get up early – I am the most un-morning person you can think of, so it would be a waste of time and set me up badly for the day.

And if I don’t achieve the 50000 words? I’ll have made a start on my second novel. I’ll have given it a go, and that’s an achievement in itself. Nothing to lose but my sanity (and let’s face it, that wouldn’t be much of a loss) and lots to gain.