After my rants of recent posts, this one is a little more light-hearted, you will be pleased to hear. Or maybe you won’t. Anyway.

I’ve recently finished re-reading all of the Harry Potter books. I do love that series. I have to admit I resisted reading them until they’d been out a while (I think it was when The Prisoner of Azkaban was out that I read the first one) as I have a bit of an aversion to hype, and I’m generally more likely to avoid something that’s massively raved about. I know, I’m awkward. But when I read Harry Potter and the Philosopher’s Stone I was hooked and have been ever since. The reasons WHY I like Harry Potter so much could fill another post (and probably will at some point) but I imagine they’re the same as most people.

THIS post is not about the books in themselves but more about adapting books for film. Or vice-versa. There’s four specific examples I’m going to talk about here – Harry Potter, A Little Princess, Disney, and The Polar Express.

I quite happily watched all the Harry Potter films until The Order of the Phoenix. Granted, there were things I had seen differently (Sirius just wasn’t Gary Oldman in my head, I’m sorry, and the floo network didn’t quite work in my humble opinion), and The Goblet of Fire was rather different. But then The Goblet of Fire is an incredibly long and densely-packed story so obviously they had to change it to fit to the strict time limits of a film. After all, isn’t that what ‘adapting’ something for film is all about? That’s fine, I’ll allow that. But when it got to Order of the Phoenix, I have to admit I was very disappointed. It wasn’t just that they’d cut stuff. They didn’t rearrange what they’d left to make it work. It felt like it lacked cohesion and depth, which I emphatically argue the books do NOT. It just did not do the book justice, not by a long shot. And I’m not talking about effects and ‘magic’ here; that was there in bucketloads. The special effects were pretty good and it sorted out the problem I’d had with the floo network. My problem was it just didn’t have the emotional punch of the books, and that’s not because it was on film as there are countless films that have the same gut-pulling heart-socking effect as the Harry Potter books. Now, it’s ages since I’ve seen The Half-Blood Prince and I haven’t seen either of the Deathly Hallows yet so I’m hoping they’re back on form. A problem with little children and a lack of nearby grandparents is that you see films about a year after everybody has finished talking about them.

A particular bugbear of mine is A Little Princess. This has always been one of my favourite books and when I watched the film I wanted to cry. First of all, why change the setting, both place and time? What purpose did that solve? The book was perfect in Victorian London and the distinctions of class and money and the skydive of Sara’s social status made absolute sense. Don’t change things for the sake of it, PLEASE! And another thing – Sara’s father is dead. Not missing, dead. She is orphaned. It makes her strength stronger, her pathos more pathetic and her eventual rescue more wonderful. Children can cope with this. You do not need to keep her father alive to make it more suitable for children. Here, they’ve diluted the magic (magic does NOT equal special effects, I think I was quite firm about that with Harry Potter) and juggled things around for no reason. Pah.

The problems aren’t just one way though. Grolier produce storybooks of the Disney films which make me want to rip out my eyeballs and conk my head off a cement floor. I like Disney films. They may be diluted versions of gruesome fairytales and they may perpetuate stereotypes of girly-girly glittery princesses (again, a debate for another post…) but I like them. I like the songs, the magic, the stories, most of the characters. Beauty and the Beast is my favourite, The Lion King, The Jungle Book and The Sword in the Stone follow behind with Cinderella taking up the rear. I also like reading books to my son and I love fairytales, so you’d think this would be a win-win situation. Unfortunately the books are dull, turgid and far far too long. They’re no good as picture books or reading aloud books, they take so long to read that you’ve fallen asleep before you’re half-way through. They’re no good as early readers as they’re so boring to read that the same thing happens. Basically, it’s taken the bare bones of the story and stripped away the magic.

I know I’ve talked about magic in all three examples so far. But it’s important; whether we’re talking about actual magic, conjuring like in Harry Potter’s world or Sara Crewe’s or simply the key ingredient that makes you sigh happily at the end of a Disney film, magic is the secret part of the puzzle that grips you when you read or watch a story and makes you want more. And that, surely, is why we turn books into films or films into books. So are there any examples where I think they’ve (the mysterious They!) got it right?

The Polar Express. We watch this every year with Daniel – the first year we didn’t realised it had been a book first; last year we did but it was just a little too advanced for him but this year he’s devouring books by the dozen and when he saw Polar Express in the library last week he just had to have it and we’ve read it together nearly every day. The film was enchanting. The animation was really good but also the characters were charming, even the annoying one (ask me if I still think that when it’s been on fifty times by Boxing Day), and the story was a nice balance of action and reflection. It’s a full-length film, so obviously they’ve had to stretch it out a bit from a picture book but it didn’t FEEL stretched. The book, when I read it, was a joy to read. It used lovely lyrical language and the main character was engaging. Comparing the film to the book you could understand why the extra characters and scenes had been introduced but the essence of the book was still in the film. That’s the difference, in my opinion, between this and the other examples above. The people responsible for the adaptation had lost the essence of the story . I understand that changes have to be made but it’s no good losing the soul of the story along the way. I guess that’s something I need to watch out for in my writing – the soul of the story. The thing that if it were lost would ruin the magic.

I’ve decided to start a new series of blog posts. On a regular basis I will review a book that my two and a half year old son has recently read. But don’t just take my word for it, check out The Daniel Pages for his point of view.
The first one we’ve chosen is Nighty Night by Colin McNaughton (click here to see on Amazon). 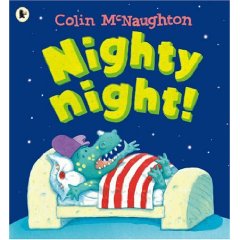 This has become part of Daniel’s nightly routine and he calls for it without fail. Technical stuff first: It has twelve double pages with bright pastel colours, big bold text (that becomes bigger or smaller to reflect tone of voice!) and appealing cartoons. The story builds up to a wonderful rant by Littlesaurus about why he doesn’t want to sleep then closes with a lovely, snuggly ending. I actually think one of the reasons we all love this book so much is because Littlesaurus reminds us so much of Daniel, and I suspect any parent will recognise their lively toddler in our hero.

The parents, Mummysaurus and Daddysaurus, are also brilliantly drawn – again, I recognise both myself and my husband in their reactions to bedtime. I love when Mummysaurus tells Daddysaurus that he’s supposed to be calming Littlesaurus down and he slinks away guiltily.

The only negative thing I can think of is if you are trying to encourage your child to stay in their bed all night, this might not help, as Littlesaurus ends up snuggling in between Mummy and Daddysaurus. But it’s such a sweet ending I love it anyway!

Reading the story is a lot of fun for both us and Daniel. The sentences are short and snappy, and Daniel loves to echo them back, sometimes finishing them before we do! I can see this being a favourite for years, and will be a good choice when he starts reading on his own as the text is so clear and the words are a good mix between challenging and manageable. 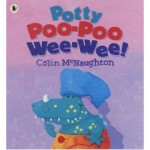 There is another book advertised on the back cover, featuring the same characters, dealing with potty training, and as soon as I finish this post I will be popping over to Amazon to buy it. If Potty Poo-poo Wee-wee is as much fun as Nighty Night I can’t wait to get started.

Thanks for reading our first book review. I’d love anyone to comment if they have read this book or can recommend similar, or if there’s anything I’ve missed off the review. If you have a book you read to your children and fancy putting up a review use the Contact Me page to send an email letting me know, it would be great to hear from you.

Don’t forget to pop over to The Daniel Pages to get Daniel’s verdict on Nighty Night!