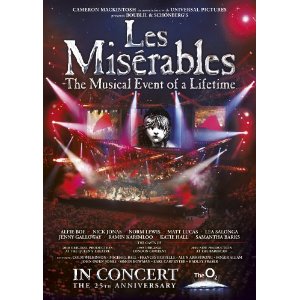 Ok, I’m sorryabout the pun. But I couldn’t really pass up the opportunity.

I decided to buy the DVD of Les Miserables: Live at O2 since I had some birthday money left, and it really is one of all my all-time favourite shows. And I have to say what I think – absolutely blown away.

I’ve got the 10th anniversary concert, and I enjoyed that. The cast was great (I mean, Michael Ball, Ruthie Henshall, Lea Salonga, and of course Philip Quast against Colm Wilkinson) and you quickly got used to the concert format, where the actors stood at microphones rather than moving around the stage, and only the principals were costumed, with a huge choir in Les Mis t-shirts behind. I want one of those t-shirts. I’d be willing to swap husband for t-shirt if anyone’s interested; he’s pretty good, more or less housetrained and hardly ever eats the furniture.

The new one, celebrating the 25th anniversary, was on another level. Repeating the concert format, but improving on it by having some props, costume changes and a little background action, it seemed to be fresher and livelier. I think this was helped by the new orchestration (aforementioned husband isn’t keen on that but I love it, brings it a little up to date without changing the power of the music). I also, though don’t quote me on this, think that both orchestra and choir are miles bigger than 15 years ago. Same conductor though, I noticed; I do like him.

So, casting. As I said, 1995 was a pretty good cast. I am still unsure whether anyone can beat Philip Quast as Javert – the power and contained fury are fantastic – but Norm Lewis was excellent. As far as Jean Valjean goes, I’m a bit of a blasphemer; I like Colm Wilkinson, but he’s not my die-hard Valjean. Alfie Boe is a strong contender for that, as here he was mesmerising, excellent focus and a soaring tenor. And I thought his journey was utterly believable, right down to his little headshakes when the Bishop of Digne tells him to become “an honest man” or his falter when he reads Marius’ letter and realises that Cosette has been keeping her own secrets.

The Thénardiers – now this was where I was expecting to grumble. Jenny Galloway is my all-time favourite Mme Thénardier, with brilliant timing, expressions in both face and voice and brutality towards little Cosette, so I was delighted to see her reprise the role. But when I heard that Matt Lucas was going to play her oh-so-charming husband, I was very disappointed, thinking the producers were going for a cheap celebrity shot and that he would just play it Little Britain style (and I’m really not a Little Britain fan I’m sorry to say). I warmed to him after watching a documentary about the production, but watching him actually do it has won me over as a new fan. He was Thénardier to the core – vile, slimy, in his own particular way, and bouncing off Madame perfectly. I would probably rate him now as my favourite in the role, and a real highlight of the show, just as Boubil & Schonberg envisaged all those years ago.

For the women, again I was delighted. Samantha Barks was vulnerable yet feisty as Eponine, and I really wanted to see more of her, and Cosette managed to not be too twee. She had a pretty soprano voice that never shrieked, which I was pleased about. Lea Salonga, who is ALWAYS fantastic, pulled off a minor miracle. Fantine is, in my admittedly limited experience, always played too old, too frumpy, too whiny and her bits are the part where you don’t mind needing to go to the loo. But when Lea Salonga did it, she brought Fantine to life. You could see her being young yet prematurely aged; I believed that men would want to seduce her; I felt pain and longing and memories of a happy youth when she was singing. Major respect to Lea for playing Fantine as she exactly should be played.

My one let down was Marius. Nick Jonas just didn’t seem big enough for the role. He looked far too young for a start, even next to Cosette, and his voice was terribly disappointing. It was very nasal, had no power and both his face and his voice seemed to convey a rather pained concentration without any joy of being in love, youthful idealism at the ABC Café or agony of losing his friends. I’m perfectly willing to believe that with lots more training and maturity he can grow into the role, but he was certainly the weakest link on that performance by far. On the other hand, Ramin Karimloo was a stunning Enjolras. He had the intensity needed, the voice to lead numbers like Red and Black or Do You Hear The People Sing? and was the kind of student every teenage girl dreams about.

Actually, I have two let downs. The second is that I am so greedy, I want more. I know that what was on the DVD is not the entire performance of Les Misérables; what I don’t know is if that is because a redacted version was performed at the event at the O2 and we are actually seeing what the live audience saw, or if clever editing has cut out bits so that to see the whole thing you had to be there. Either way, I would have been over the moon to see the whole 3 hours of Les Mis as I know it on the DVD. It was magical from start to finish. And the buzz I got from seeing the special finale just on DVD was amazing, I can’t imagine the adrenalin of actually being there!

Here’s the link to Amazon if you’ve enjoyed my review; highly, utterly recommended.

As an aside, I’m thinking about doing a regular blog post about musicals. Not always, or even often, a straight review like this, but my tuppence’orth on different aspects of my favourite shows. Whaddya reckon? Comments appreciated, as always.

7 thoughts on “Not very Misérable”